The serve is without a doubt one of the most effective weapons in any tennis player’s arsenal, and although the finest tennis serves combine power and precision, having one of the quickest serves in the game may make the game appear a lot easier than it is.

What is the average serve speed in tennis?

How does Tennis Serve Speed get measured in matches?

When the ball leaves the racquet, the serve speed is measured. After that, friction, wind resistance, and other factors cause it to slow down dramatically. Here’s some additional information:

Radar guns assess speed using a “first-return” signal, which means they measure the speed of the first strong signal they detect. There is a tiny lag after hitting, but it generally picks up the serve’s full pace as it leaves the racquet. The racket gets spotted, but because it is not nearly as quick as the ball, it gets disregarded, and the radar displays the fastest signal, which is usually the ball.

The radar gun gets located behind the two servers in the background in pro tours. At either end, there is one. You may find them on television.

From the radar gun’s centre to the tennis ball, velocity gets recorded in a horizontal line. As a result, serves struck along the centre of the “T” tend to register faster speeds than those struck out wide with the same amount of force. It is due to the broad serves’ direction being at an angle to the gun’s line of sight. The serves that strike the “T” are the most precise in the case of measurement.

Available sources to determine the pace of your tennis serves?

Hand speed guns are costly and unreliable for measuring tennis serve speed unless the ball gets served directly at its doppler cosine effect. Professional court rental is expensive and tough to come by. The third option is to use an app, but let’s be honest: most of them are terrible, and the calculations are so sloppy that it doesn’t seem worth it to attempt.

How does an app function, and how is it different from other available sources?

The app recognises court and ball locations during the tennis serve by analysing every video frame utilising advanced video processing and image recognition technology. With the recognition data, these positions get transformed into 3D world coordinates, and the speed can be estimated with excellent precision using the video frame timestamp.

Why Do Tennis Matches Get Delayed: 11 Reasons And Examples

The user can view the actual recognition results of court and ball positions since they get displayed on the video. Later, in a dedicated video player with panning and zooming, you may examine and analyse your serves to improve your technique.

What are the techniques involved in measuring the serve speed by an App?

There are two kinds of recognition: automatic and manual. In automated mode, like in professional tennis, speed is determined at the moment of serve.

As several ball position samples are gathered and examined, this metric is more accurate as the ball will highlight in red on the video. Manual mode gets utilised if there aren’t enough ball recognition frames available.

The apps are free to download and use to see how it works; however, estimated speed figures are not available unless an app upgrade to pay. It will set you back the same as a single tennis ball, but it will provide you with a valuable tool.

How does the speed gun measure the serve speed?

Is Tennis Bad For Your Knees?

Because the ball moves, the pulses bounce off it at a different frequency than when they left the gun because the distance between the gun and the ball varies with each pulse. Each reflected pulse returns closer to the speed gun than the previous one and therefore is closer behind the preceding one if the ball is moving towards the gun.

How useful is it?

Because the pulse’s speed of travel remains constant, the pulses arrive closer together than when they left, resulting in a greater received pulse frequency than that broadcast. Accordingly, the received frequency drops as the ball moves away.

The difference between the sent and received frequencies is used to compute the ball’s speed. Because just a small portion of the delivered pulse reaches the ball and is re-received by the speed gun thus, the radar pulses received get reflected by stationary or slow-moving objects like walls, players, and others.

On a final, the fastest serves do not occur.

It is feasible to drill down into a single match and analyse its serve trend using the top-ranked tennis players as a case study. All of each player’s serves help to define the play. By presenting the variation of points in highest and minimum speed, the user may visually analyse the players’ serve methods in the selected matches.

Are Private Tennis Lessons Worth It?

Several sources consistently monitor the serve speeds at major tennis events, employing a variety of radar guns, cameras, and software to determine the speed of a tennis ball as it leaves the server’s racquet. Rarely are competing outcomes compared head to head.

Serve-speed readings have become regular tennis fare, with courtside speed clocks at every major tournament. At the Olympics and several international games, they are measured in kilometres per hour, while at US tournaments, they get measured in miles per hour. Players even try to beat their serve-speed records.

Because air pressure slows the ball after impact, speed refers to assessment at that point. If only one provider gets the speed right while the others misjudge it, records might tumble simply because a big server was in the right location at the right time: a tournament with the most accurate serve-speed system and hence more numbers.

Where Do Tennis Players Stay During Tournaments?

Where does a tennis player prefer to stay?

What Are the Types of Faults In Tennis?

Last updated on September 28th, 2022 In many forms of competitive sports, there 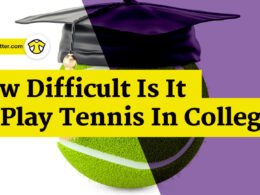 How Difficult Is It To Play Tennis in College?

In today’s competitive world, it’s no surprise that many students