Tennis racquets feature a variety of characteristics, such as stiffness and flex, which you should consider when purchasing a new racquet. It may appear another number on a list of parameters offered by racquet-merchants at first look. Even so, especially if you have arm ailments like tennis elbow, it’s crucial to think about how tight your racquets are and how they affect your efficiency and comfort.

In a tennis racquet, what does stiffness mean?

How Do Tennis Racket Sizes Work?

Stiffness is characterised by how much the frame bends when it makes contact with the ball we mentioned earlier. If all other specifications are equal, “stiff” rackets are less distorted upon impact than “flexible frames.”

The stiffness of a racket is one of the most crucial specifications since it impacts a feels a player when they make contact with it. This number tends to perplex people, and to be honest, perplex me earlier in my career.

When we say a racket gets warped at impact, we’re not talking about something that can with the naked eye. When hitting a ball, flexible rackets won’t bend to the point where you can see it, but players will notice a difference in how the ball comes off the strings.

A tennis racquet with a RA rating of 55 to 60 or less than 64 is considered flexible. At the same time, the stiffness of a semi-rigid tennis racquet is between 65 and 69. Stiff racquets fall into this group since their RA value is greater than 69.

Surprisingly, there is no universally accepted racquet stiffness measurement formula. Outside of the racquet sports term, RA does not use it, and it’s thought to stand for racquet analysis. In the early days of the racquet, stiffness testing to a frame with an opposing force set at 327mm.

What effect does stiffness have on a racket?

Now it’s time to get down to business: why does stiffness matter? The stiffness of the racket impacts how much control and feel it has. It is why this specification should consider so important when choosing a Racket.

Many people are perplexed by this grade because the phrasing is slightly conflicting. Some players assume that a stiffness rating will cause the racket to feel stiff, similar to a board ( more control, less power).

The reality is just the reverse. Remember that stiffer rackets allow you to generate more power, not less. It may appear strange at first, but explained, it will make more sense. When the energy hits the strings, stiff frames allow it to bounce back rapidly and explosively.

The less energy passes to the racket frame and more in the ball. Less stiff frames absorb more energy from the ball, resulting in less power from the racket when the ball moves off the strings.

Most of us mistakenly believe that a stiffer racquet provides greater control and less power. However, this is not the case. Frames absorb less energy and bounce back, resulting in greater power generated. Flexible racquets absorb more energy at impact and provide less.

The aspect that determines whether a flexible or stiff racquet generates power is energy transmission. As previously stated, energy transfer is reduced with stiff racquets because they bend less during impact. Surprisingly, your shots will have more force.

In general, the control component determines the player’s technique and skill level. Although the stiffness racquet affects performance, it does not make a difference. Stiffer racquets are more stable than flexible racquets, allowing for more error margin on off-centre shots.

The fact that harder racquets are more comfortable than flexible ones may surprise you. When the ball strikes the racquet, tiny vibrations produce their dampening action. Furthermore, these minor vibrations fade away faster.

Tennis elbow racquets are easy on the arms general is their most notable feature.Stiffness is low. Tennis racquets absorb fewer vibrations than other sports equipment, causing discomfort and increasing the risk of sports-related injuries such as Tennis Elbow.

Is it possible to determine the stiffness of a racquet on my own?

While you can’t get a RA number by measuring racquet flex at home, you can get a notion of it by laying it flat against a surface and pressing down on the neck to see how much give it has. It is only effective if you have two (or more) racquets to compare,

How To Ship Tennis Rackets?

and it’s not scientific, but exerting pressure with your hand will reveal the difference in flex. You could also use the Wilson method of clamping a racquet to a table and hanging a 2.8kg weight from the hoop, measuring how far it flexes in millimetres.

Is stiffness linked to a higher risk of tennis elbow?

Yes, absolutely, but it is not the only spec that might cause injury. The way joints whip around when using a stiff and lightweight racket can cause damage, especially when using hitches in technique. Fewer stiffs can also cause injury, especially if they are heavy when it does not bend joints take the brunt of the impact.

The stiffness of your racket may be causing you damage, but it isn’t always as simple as switching to a stiffer racket. It is critical to consider the entire picture rather than a single aspect. Before purchasing a racquet, it is necessary to understand the racquet.

For a long time, tennis attracting celebrities and the world’s who’s

Next
5th Set Tiebreak In Tennis

What Happens When a Tennis Match Is Tied?

When it comes to buying a tennis racket, there are many factors that you need to 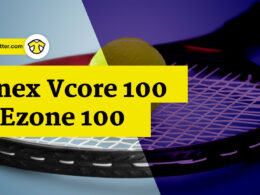 The Difference Between the Yonex Ezone 100 and Yonex Vcore 100

Are Tennis Rackets Allowed On Planes? With A Detailed Table