There is no rule to determine who serves first in a tennis match. The umpire executes a coin toss in professional competitions, and the winner decides whether the player wants to deliver or receive first. If you’re playing with a friend or in a club tournament, there are a few options for deciding who servers first.

The Spin of the Racket

The racket spin is the most popular means to identify who serves first. There will be a logo, letter, or design, in the bottom of each racket’s grip varies depending on the racket’s brand.

In professional matches, the coin toss is the most popular technique for determining who serves first. The coin toss gets performed standing at the net by the umpire with both players. One of the players chooses heads or tails, and the winner of the coin toss determines whether to serve, receive, or defer.

The fourth and final method for determining who serves first lets the oldest player decide. It is good of all the other ones, but it can get used if a player desires to honor the elder player.

The winner of the “duel” must determine whether to serve, receive, or defer to the other player after both players have completed the coin toss, racquet spin, or rock-paper-scissors game. The fourth option for players is to choose which end of the arena they wish to begin the match.

It ultimately comes down to personal preference: some players see a benefit in serving first, while others prefer to return, and still, others want to watch what the opposing player will do. We’ll go over the benefits of each one afterward.

After the victor of the “duel” has made their first choice, the opponent has the option to make their own. So, for instance, if Player A succeeds the coin toss and opts to begin serving, Player B can select which side of the court to begin on.

Player B can choose whether to serve or receive if Player A picks one side. After each game, players will take turns trying to deliver once the match begins.

In A tiebreak, Who Gets Serve First

If the players get tied at six games apiece, they must play a tiebreak, a unique play designed to break a tie. The serving rotation in a tiebreak differs from that of other games. The opening point gets served by one player and continues by each player delivering for two points until the set is complete.

Due to the various serving rotations, players may become perplexed about who should serve first during a tiebreak. The rules are simple, as the turns should get taken in the same order as before. As a result, if Player A served during the previous game before the tiebreak, Player B will deliver for the tiebreak’s opening point.

In the Second Set, Who Serve First?

Things get a little trickier if the last round finished with a 7×6 score. The player who began receiving in the previous set tiebreak should start serving in the second-set tiebreaker.

What Are The Advantages Of Being First To Serve?

It may appear to be a minor factor, to decide whether to serve or receive first can have a significant impact on the match’s outcome. Serving or receiving is of personal choice, but players can base their selection on their tactics against various opponents. If you can break your opponent’s serve in a tennis match, serving first gives the benefit of building an advantage.

All players may choose the same outfits at random before a game, but this is far from the case. They do, however, wear similar attire in many cases, and this is not by chance. Most professional athletes have sponsors who help them earn a lot of money, and the businesses want their sponsored athletes to wear their logo on their clothing.

Several players will get sponsored by the same companies. There are a few brands with adequate resources to invest in top-ranked players. As a result, players supported by the same firms will wear similar outfits, if not identical.

Although the reason for so many athletes wearing the same costume, they get sponsored by the same company, there are notable outliers. Wimbledon, the world’s most prominent tennis event, is an illustration of this.

All players at Wimbledon are required to wear all-white outfits. It is due to the tournament’s tradition of having a stringent dress code that requires everyone to wear an all-white dress, including their undergarments. The standards are so severe that players who do not adhere to the dress code risk disqualified.

Of course, the players remain still dressed in their sponsors’ apparel. However, because they all get dressed in white, it’ll appear that all of the participants at Wimbledon utilize the same clothing. They are in terms of color, but not in any other way.

Unless you’re a professional, you generally won’t want to spend more

Next
How Does Prize Money Work In Tennis?

How Does Prize Money Work In Tennis?

When you decide to seek a job in a professional sport, one of the things that 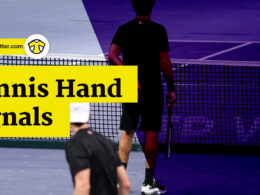 As any parent knows, children are full of energy and always on the go

How To Beat A Pusher In Tennis?