Why Do Tennis Players Check The Balls Before Serving?

When players examine the balls, they consider the quality of each one before deciding which one is best for them. Most servers, particularly those who rely heavily on speed, seek the smoothest ball possible for maximum speed.

A fluffier ball is desirable for a second serve because it is easier to control. The primary reason players inspect balls before serving is to select the smoothest balls to increase speed. Tennis balls become fluffier and slower as the game progresses.

Another purpose is to concentrate during the time between points. Tennis players are notoriously superstitious, and selecting the “correct ball” might help them relax.

What factors do tennis players consider while selecting a ball?

Choosing which ball to use is, for the most part, a simple process. You take out a tin of balls and begin playing with them, picking up and hitting the closest one. Almost all beginner players, as well as some competitive players, fall under this category.

Professional players in training will also only hit the ball that is closest to them. In most matches, though, this is not the case.  They will take three or four balls from a match and inspect them before discarding the spares.Why is this, and what factors do tennis players consider when selecting a ball?

Tennis players look for the ball that has the least amount of fluff. If there is less fluff on the ball, it is newer. Because a new ball weighs less, it will bounce higher when served. It will move faster since it is lighter.

Tennis balls construct bouncy rubber separated into two halves and felt-coated. They are mass-produced in large quantities. The felt covering isn’t merely for aesthetic sake; it also serves a practical purpose. The felt covering lowers the ball’s speed in the air, adjusts the bounce, and softens the balls slightly. The coating provides enough surface area for the tennis ball to spin.

Servers that rely on a first serve will always go for the smoothest tennis ball they can find. It’s about gaining the most speed and ahead starts on the initial shot. Even if it doesn’t turn out to be an ace, it may set up a simple follow-up that leads to a point.

Although it may not appear to make much of a difference, even a few extra miles per hour can throw a returner off. In a game of inches, every tenth of an inch counts.

A server who hits a smoother ball might also be an effective returner for flat hitters. There is a chance of having some exceptional success by flipping the point in favour of the returner. On the defensive, players hope that the ball is as fluffy as possible, giving them that extra bit of time to collect balls from any location on the court.

Using Fluffy Balls as a Strategy

Not everyone relies on a large service, and they could come up against someone who smacks the ball hard. If that’s the case, using the fluffier balls could be preferable. They boost second-serve precision and the ability to slow down an opponent who is attempting to smash balls away.

It is why it makes a lot of sense for people who generally hit second serves. The fuzzy balls can boost the odds of all strokes going in rather than overhitting and potentially committing double faults. Returners will have an easier time bringing these balls in, and they will be able to hit a little harder knowing that they will not make an error. Every matchup requires people to be aware of their abilities, which is balancing.

What Color Is A Tennis Ball?

Why do Tennis players bounce the ball before serving it?

The most typical cause is that they want to take their time and get ready for the next point. It prevents the player from rushing to serve by bouncing the ball. I have players bounce the ball first before tossing it when I see them racing to serve.

It soothes them and provides them more time to concentrate on the shot they are about to take. Another reason for players to bounce the ball is to ensure that it is of good quality. For example, some balls have an odd bounce even if they feel OK in your hands.

You’ll notice whether the ball has an unusual bounce after bouncing it multiple times. You can then switch the ball if it is unusable. You’ve already figured out how it bounces, whereas your opponent hasn’t. Some players prefer to bounce the ball down on their racket’s strings instead.

The only reason some players bounce the ball is that everyone else does. Andy Murray, the former world number one, admitted in 2010 that he does it because everyone else does it. It’s part of the game’s culture, like apologising for a missed shot.

Tennis players of all levels that a tennis ball’s lifespan is limited. Casual players will usually play a match with just one can, and the balls will move substantially differently by the finish than they did at the start.

Professional tennis players only utilise a set of tennis balls for seven games at the start of the match and nine games after that. Tennis balls lose that much life in such a short period, which seems absurd, but that is how hard the ball hit at that level.

Is it permissible for players to select their balls?

Professional tennis players are allowed to review three balls before serving, allowing them to choose one smooth and one fluffy ball. Some gamers want a smooth ride, while others prefer a puffy ride. However, most players, particularly those on the main tennis tours, choose one of each.

Also, we claim that the rules state that players can only check three balls, but they are free to verify as many as they want as long as they stay under the three-ball limit.

Prev
How to Use Tennis Elbow Straps?

How to Use Tennis Elbow Straps?

Step 1: For a vast selection, head to your local sporting goods store

Next
Why Do Tennis Players Keep Balls In Their Pockets?

Why Do Tennis Players Keep Balls In Their Pockets?

Tennis players are obnoxious about their routines

Why Are Tennis Balls Fuzzy?

Last updated on June 30th, 2022 Have you ever wondered why things look soft or

Last updated on June 29th, 2022 While a tennis ball is not typically used in 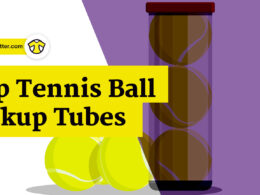 In cold weather, the rubber used in tennis balls hardens